Proud Moments for all Athletes in the Paralympic Cross Country Event 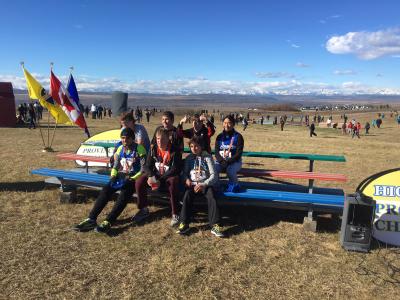 On October 15th, 2016, seven athletes took part in the para race in the ASAA Cross Country Provincial Championships. The ASAA is not only proud to offer para categories in two different provincial championships (Cross Country and Track and Field), but excited to see the popularity of the para events grow and allow more students to be included in high school sport. These opportunities would not be possible without the exceptional coaches who promote these programs within their schools and go out of their way to identify and encourage the students who are eligible to compete in these events.

The following story was copied from Facebook with permission from the original author, Stephen Robertson:

“31 years ago I was attending the Alberta Provincial Championships in Cross-country running. This was an amazing day today as my middle son, while struggling in the ASD realm, attended the same championships in the Paralympics T20 class, and took GOLD medal. Awesome. It turned out to be a sunny day with the snow capped mountains in the background of Cochrane Alberta where Tim took his first medal.

He was discovered in a unique way. Struggling with autism also combines anxiety disorders. One of Tim’s coping methods is to run home after school instead of taking the bus to ‘decompress’. When he gets home, he continues to run the dog to complete his 10,000 steps - also to appease his OCD Fitbit obsession.
One of the teachers noticed this kid jogging his 5 km home daily and advised the Paralympic coach at Facey. Soon the coach phoned us parents and asked for Tim to attend as Bev Facey HS had another mission, to be one of the inaugural schools to submit a team in this event which no-one attended in 2015 - this year there was 8 registrants. Tim and several others from Facey all took home medals today - proud moments.

This is further unique because the Western Canadian Paralympic IOC rep was also scouting. They are observing for 2020. Apparently, several universities in Canada are investigating ways to create adaptive programs and scholarships to develop special needs students in both academics and athletics. This could be indicative of exciting times in the future for Canada and its autistic family.

In the meantime, congrats Tim and congrats to Bev Facey HS. Well done.”

Congratulations to all the students who competed in Cross Country Provincial Championships last weekend, especially those athletes who made history in the para event!

All results for the 2016 Cross Country Provincial Championships can be found here.